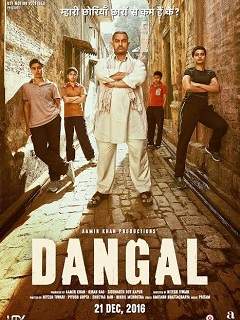 MOVIE VIDEOS MOVIE NEWS MOVIE Small POSTS
Mahavir Singh Phogat (Aamir Khan) is a former amateur wrestler and national champion based in Balali, a village in Haryana. He was forced by his father to give up the sport in order to obtain gainful employment. Dejected that he could not win a medal for his country, he vows that his unborn son will. Disappointed upon having four daughters, he gives up hope. But when his older daughters Geeta and Babita come home after beating up two boys in response to derogatory comments, he realises their potential to become wrestlers and begins coaching them. His methods seem harsh, including grueling early morning workouts and short haircuts to avoid lice. Despite facing a backlash from the villagers, he goes ahead with them, training them in his makeshift mud pit. Initially, the girls resent their father for his treatment but soon realise that he wants them to have a good future and not grow up to be stereotypical housewives. Motivated, they willingly participate in his coaching. Mahavir takes the girls to wrestling tournaments where they wrestle with boys and defeat them. Unable to afford wrestling mats, he uses two layers of mattresses and trains them in freestyle wrestling to prepare them for competitive events. Geeta goes on to win the junior and senior championships at the State and national level before heading to the National Sports Academy in Patiala to train for the forthcoming Commonwealth Games. Once there, Geeta makes friends and begins to disregard the rigour and discipline she has been brought up with. She regularly watches television, eats street food, and grows her hair. Her coach's training methods and wrestling techniques differ significantly from her father's which she believes are superior. During a visit home, after taunting her father for his old techniques, she defeats her ageing and visibly exhausted father in a ferocious bout that ensues. Babita tells an unrepentant Geeta that she shouldn't forget their father's techniques and reminds her that she owes all the success to him. Winning the senior national championships herself, Babita follows Geeta to the academy. Geeta, however, finds herself losing every match at the international level. Subsequently, her coach coaxes her to compete in the 51 kg weight class from 55 kg. Frustrated, and persuaded by Babita, she tearfully makes peace with her father, who comes to Patiala with his nephew (Aparshakti Khurana) and begins coaching them secretly, using the same methods as when they were younger. Learning about this, and furious with Mahavir's interference, the coach wants the girls expelled. The sports authority allow them to continue and bar Mahavir from entering the academy and the girls to go out. Determined to continue assisting his daughters, Mahavir obtains tapes of Geeta's previous unsuccessful bouts and coaches her by pointing out her errors over the phone. At the Games, competing in the 55 kg class, Geeta eases her way into the final. Mahavir constantly contradicts her coach's instructions while sitting in the audience which she follows while disregarding the latter. Just before the gold medal bout, the jealous coach conspires to lock Mahavir in a closet. Geeta lags behind managing to win the first session while losing the second. Trailing 1–5 in the final session and nine seconds left, she recalls the tactical techniques taught by her father and a 5-pointer that despite being difficult was not impossible. Geeta executes it on her opponent in the final three seconds, taking the score to 6–5 in her favour, thus winning the session, and the bout 2–1. In the process, she becomes the first Indian female wrestler to win gold at the Games. Mahavir returns just in time to embrace his daughters, frustrating the coach's hopes of obtaining credit before the news media.

Max Comment Lenth: 100 Words; Note: This is review section so please write a review only; Don't comment on movie information, else your comment will be deleted.

Making Of | Behind The Scenes