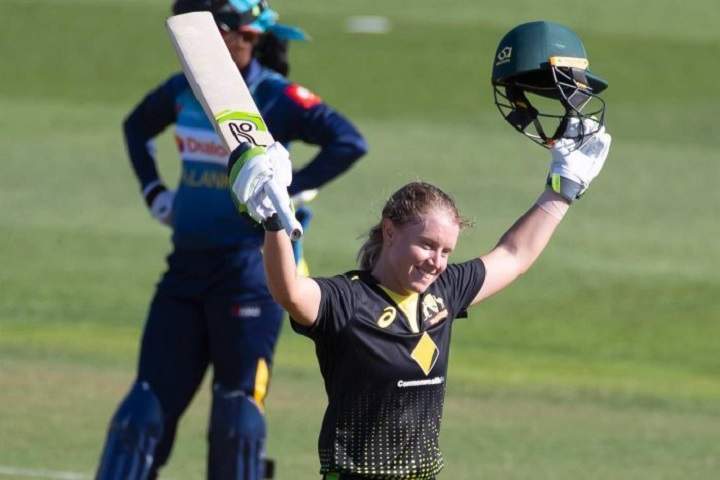 Australia's wicketkeeper batter, Alyssa Healy slammed the second-fastest century in women's T20 internationals against Sri Lanka on October 2 at North Sydney Oval, Sydney in the 3rd and final T20I. Healy, who became the first player to play 100 T20Is as a pure wicketkeeper in women's cricket, scored her century off just 46 balls to down Sri Lanka.

Here are the Top 5 fastest centuries in women's T20Is -

1. Deandra Dottin (West Indies, 38 balls) - Deandra Dottin is the first woman player to hit a century in T20Is. In the World Cup 2010, one of the most powerful batters in women's cricket, Dottin took South African bowlers apart and slammed the fastest century off just 38 balls. She remained unbeaten as she made 112 off 45 balls with the help of 7 fours and 9 huge sixes. With the help of her power pact performance, West Indies downed South Africa and won the game by 17-runs.

2. Alyssa Healy (Australia, 46 balls) - Undoubtedly one of the most dangerous T2O batters, Healy has not only scored the second-fastest hundred but also she is now the highest individual run-scorer in women's T20I innings. Her unbeaten 148 off 61 balls helped Australia to post second consecutive 200+ scores while batting first as they reached 226 just the lose of 2 wickets. Sri Lanka always looked under pressure and never looked to chase this total as they could only manage 94 for loss of 7 wickets in their 20 overs. Australia won the game with a massive margin of 132-runs and take the series 3-0.

3. Tammy Beaumont (England, 47 balls) - An English opener and a classy right-hander, Tammy Beaumont has scored a 47-balls hundred against South Africa in 2018 in Taunton. With the help of Beaumont's century, England piled on a massive total of 250 in 20 overs. It was the highest team total at that time and 3rd highest overall. Beaumont made 116 off 52 balls including 18 fours and 4 sixes and scripted England's massive win of 121-runs.

4. Harmanpreet Kaur (India, 49 balls) - Harmanpreet is the first and only India woman player to have a century to her name. The captain of the India team in the T20 format, Kaur, scored her century off just 49 balls against New Zealand at Providence in November 2018. She got 103 off 51 balls with 7 fours and 8 sixes as India made 194 for 5 while batting first. New Zealand fight back with the effort of Suzie Bates but eventually fell short of the target as India completed the 34-runs win.

5. Danielle Wyatt (England, 52 balls) - A specialist T20 player, Danielle Wyatt downed India total of 198 single-handedly in Mumbai, March 2015. She scored impressive 124 off 64 balls with 15 fours and 5 sixes and chased down India total for the loss of 7 wickets with 8 balls to spare. She reached to her hundred off just 52 balls which was the second-fastest at that time.