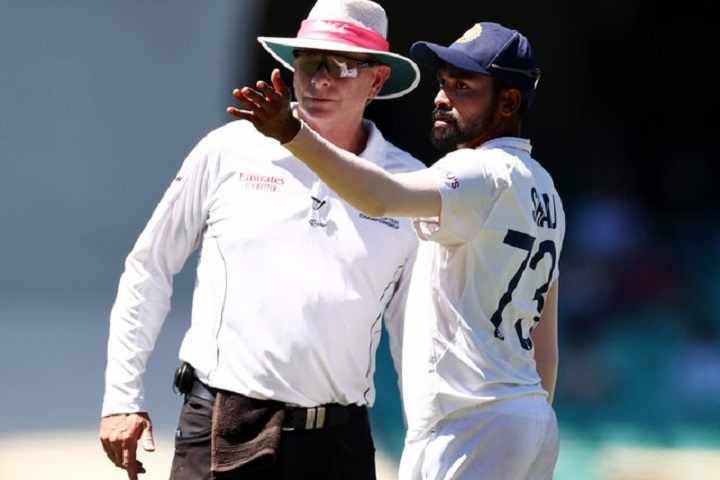 The Indian team management has lodged a complaint after two players - Jasprit Bumrah and Mohammad Siraj being subjected to racial abuse by spectators during the third Test against Australia at Sydney Cricket Ground (SCG).

A bunch of crowds passed racial remarks on Bumrah and Siraj during the 3rd and 4th days of play. The play was halted for a few minutes on the fourth day of the third Test after pacer Mohammed Siraj complained of abuse from a section of the crowd, leading to the expulsion of some spectators and an unreserved apology from the host board.

Taking this matter seriously, the ICC on Sunday sought an action taken report from the host country's cricket board, "The International Cricket Council (ICC) has strongly condemned reported incidents of racism during the ongoing third Test match between Australia and India at the Sydney Cricket Ground and have offered Cricket Australia all necessary support in investigating the incidents", the apex body said in a statement.

Team India captain Virat Kohli has called the incident "unacceptable" and said that this "incident needs to be looked at with absolute urgency and seriousness and strict action against the offenders should set things straight for once".

The incident needs to be looked at with absolute urgency and seriousness and strict action against the offenders should set things straight for once.

Reacting to the same, Cricket Australia said in a statement that it has reaffirmed its zero-tolerance policy towards discriminatory behavior in all forms following the alleged racial abuse of members of the Indian cricket squad by a section of the crowd at the SCG yesterday.

Cricket Australia has reaffirmed its zero-tolerance policy towards discriminatory behaviour in all forms following the alleged racial abuse of members of the Indian cricket squad by a section of the crowd at the SCG yesterday. Full statement 👇 pic.twitter.com/34RYcfKj8q

See the reaction by others on the incident -

I personally have heard many things on the field while playing in Australia about Me My religion My colour and much more..This isn’t the first time the crowd is doing this nonsense..How do u stop them ?? #AUSvIND

I hope the spectators evicted from the SCG today aren't allowed in to a ground at anytime. They tarnish our sport and they tarnish the reputation of their society.

Unacceptable behaviour there is no place for racism, I hope this is dealt in the most severe way. #AUSvIND

Very unfortunate to see what’s happening at SCG. There is no place for this rubbish. Never understood the need to yell abuse at players on a sporting field.. If you’re not here to watch the game and can’t be respectful, then pls don’t come and spoil the atmosphere. #AUSvIND

Breaking: I am appalled to say Siraj was called a brown dog today in Sydney. This is what was said today morning to go with all the other abuse. Just throwing the spectators out isn’t enough. We need some real action if we have to stop this. Watch @SportsTodayofc 5@5 for more.

Disappointing to see that my teammates were subjected to racial abuse repeatedly in Sydney. There is no place for racism in today’s world and it is not acceptable. I hope that strict action is taken against those who misbehaved. #TeamIndia pic.twitter.com/pKZA9Y0gfv

It's not about Australia or India anymore. Cricket as a sport has to come up with a stronger plan to send out the message loud and clear that WE DO NOT tolerate racial abuse, just like the NBA did in 2020.#INDvAUS #Ausvsindia

Tum karo toh Sarcasm , aur koi Kare toh Racism .
Very unfortunate with what some of the Australian crowd has been doing at the SCG and spoiling the vibes of a good test series. pic.twitter.com/mrDTbX4t7i

Mohammed Siraj’s father died from a lung condition in November. Siraj missed the funeral to stay on this tour and broke through for a Test debut on Boxing Day. A monumental sacrifice, and it would be so disappointing to have that achievement soured by racism at the SCG. #AUSvIND

Disappointing to see the purest form of the game getting disturbed by racial abuse. It's not at all acceptable. The accused should be banned for life across all stadiums. #AUSvIND

We Have An Attack That Can Disrupt Opponents - Ajinkya Rahane