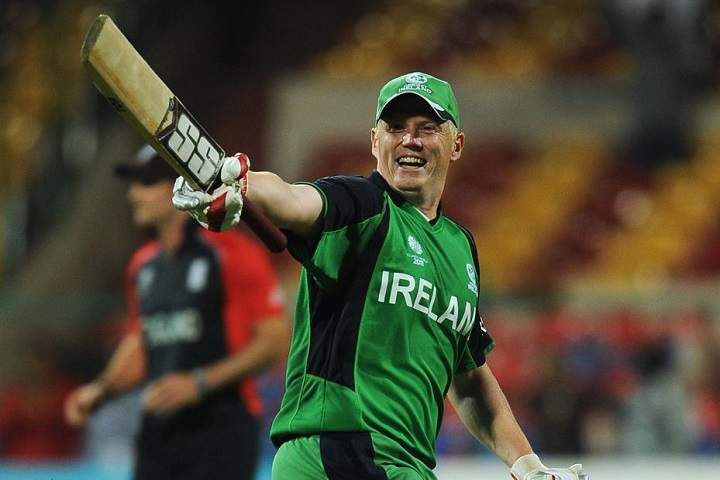 England captain Eoin Morgan slammed a 57-ball hundred against Afghanistan in match number 24 of World Cup 2019 at Emirates Old Trafford, Manchester on Tuesday (June 18). This is the 4th fastest hundred in World Cup history. His innings was cut short by Gulbadin Naib after hammering 148 off just 71 balls.

1. Kevin O'Brien (IRE, 50 balls) - Ireland's all-rounder Kevin O'Brien has a record for the fastest century in World Cup. In 2011 against England, O'Brien smashed a 50-ball century and helped Ireland to chase down 328 with 5 balls to spare. He smashed 113 off 63 balls including 13 fours and 6 sixes against the likes of James Anderson, Stuart Broad, and Graeme Swann.

2. Glenn Maxwell (AUS, 51 balls) - Australian hard hitter Glenn Maxwell took Sri Lankan bowlers apart in Sydney in 2015. Australia scored 376 batting first and beat Sri Lanka convincingly at the end by 64 runs. But it was Maxwell who was the architect of his side's big win. He got out after smashing 102 off 53 balls including 10 fours and 4 sixes.

3. AB de Villiers (SA, 52 balls) - South African star and one of the greats of the game, AB de Villiers pummeled West Indies in a group match in 2015 when he blasted 162 off just 66 balls including 17 fours and 8 gigantic sixes in Sydney. Windies bowlers had no idea what was happening to them. South Africa scored a huge total of 408 in 50 overs and West Indies could only manage 151 in 33.1 overs and suffered a massive 257-runs defeat.

4. Eoin Morgan (ENG, 57 balls) - It was England's skipper Eoin Morgan's day at Old Trafford, Manchester. He created a new world record for maximum sixes in an ODI inning as he hit 17 sixes en route to his breathtaking 148 off just 71 balls against hapless Afghanistan. It was another example of England's aggressive brand of cricket that make them favourites to win this year's World Cup. Hot favourites and hosts England eventually piled up 397/6 in 50 overs after opting to bat first and Afghanistan started their innings with a lot of pressure of huge total and hence, they could never recover from that and lost by 150-runs.

5. Matthew Hayden (AUS, 66 balls) - Australian legend Matthew Hayden slammed a 66-balls hundred against South Africa in 2007. It was the fastest hundred at that time in the World Cup history. Australia piled 377 on after opting to bat first. Hayden scored 101 off 68 balls including 14 fours and 4 sixes. South Africa started their chase with a bang as Graeme Smith and AB de Villiers added 160 for the first wicket in just 21 overs. But once AB got out, Africa lost the momentum and bundled out on 294 in 48 overs and lost by 83-runs.

Kajol shares BTS picture with Aamir Khan from the pre-shoot ...