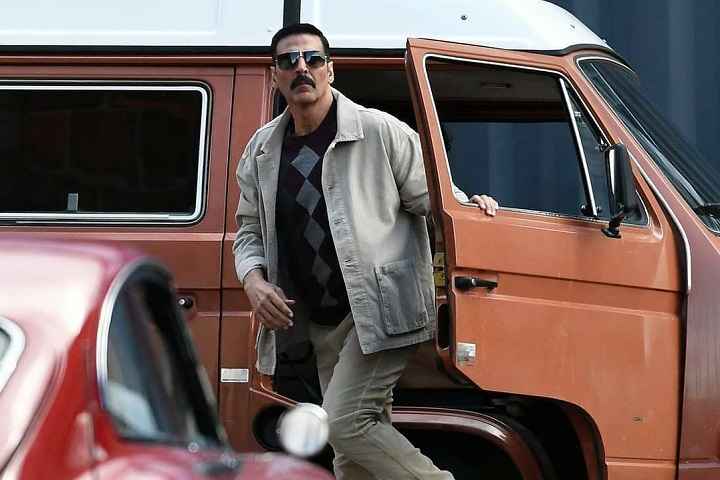 On Akshay Kumar's 53rd birthday, the makers of his forthcoming spy-thriller movie, Bell Bottom have unveiled a new retro look of Akshay.

In the film, sets in the 1980s, Akshay Kumar will enact the role of a RAW agent. It is being directed by Ranjit M Tewari.

Check out the new poster -

On #AkshayKumar's birthday, Team #BellBottom unveils the new retro look from the spy thriller, set in the 1980s. AK enacts the part of a #RAW agent in the film, which is currently being filmed in #Scotland... #HappyBirthdayAkshayKumar | @akshaykumar pic.twitter.com/2Us3HQg8z2

Last week, BTS pictures from the shoot surfaced on social media and they trended big time. The movie is currently being filmed in the Glasgow city of Scotland.

Akshay Kumar to work with Ekta Kapoor after Bell Bottom

First Glimpse: Akshay Kumar On The Sets Of Spy-Thriller Bell-Bottom In Glasgow

The film's leading lady, Vaani Kapoor is also on her way to join the cast of the movie that is being directed by Ranjit M Tewari.

On Friday (September 4), Akshay Kumar's pictures went viral while shooting for the movie. The photos were captured by the local photographer which show filming around Glasgow's Barras Market (as per the local news sites).

More from the first glimpse of #BellBottom

Bell-Bottom is one of the first films to announce the resumption of its shooting schedule after the coronavirus lockdown.

The movie also stars Huma Qureshi and Lara Dutta apart from Akshay and Vaani. It is being produced by Jackky Bhagnani, Nikkhil Advani, Deepshikha Deshmukh, and Monisha Advani.

2.0 Will Release In China

Kollywood blockbuster movie 2.0 is going to release in China on 6th September 2019.

This film is directed and written by S. Shankar and produced by Allirajah Subaskaran, Raju Mahalingam.

A. R. Rahman composed the music of the film.

Official announcement (made by Lyca Productions):

Lyca Productions Pvt. Ltd. is proud to associate with HY Media, one of China's most prominent Production and Distribution companies, for the Chinese release of "2.0", the magnum opus of Director Shankar, starring pan-Asian Superstar Rajinikanth and Bollywood megastar Akshay Kumar.

2.0 produced by Subaskaran Allirajah, is the biggest film in the history of Indian cinema. Dubbed and subtitled versions of 2.0 is slated to release in China in 10,000 theaters with 56,000 screens (including 47,000 3D screens) in May 2019, the widest 3D release for any foreign film in history.

Update: 2.0 release date earlier decided to release in May, then 12th July but now it will release on 6th Sep 2019.


Lyca Productions recognizes China as a major film market and looks forward to building a long and fruitful relationship with HY Media.

Dangal has 9.8 ratings in China.

For more and the latest news about Kollywood Box Office Collection, stay tuned to us.

This film is produced by Dharma Productions and Cape Of Good Films and slated to release on 19th July 2019.

And it is directed by Raj Mehta.

The shooting starts in Chandigarh. Akshay Kumar and Kareena Kapoor Khan will join Diljit Dosanjh and Kiara Advani in the next schedule.

Both are having fun about how they should be on time on the set of Akshay Kumar' film.