First Glimpse: Akshay Kumar On The Sets Of Spy-Thriller Bell-Bottom In Glasgow 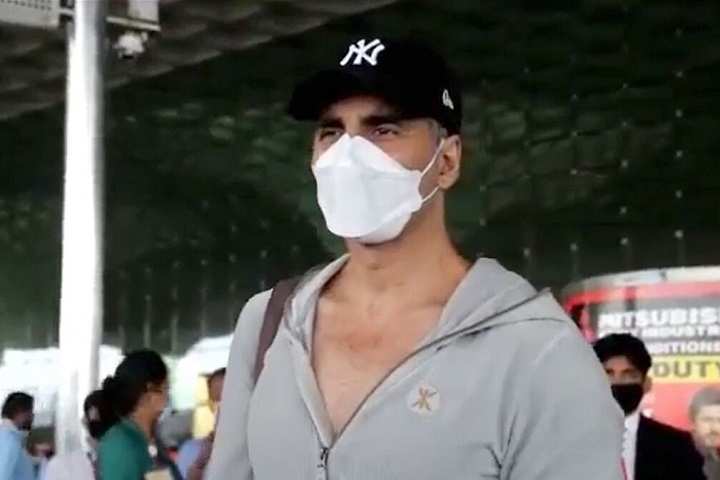 The film's leading lady, Vaani Kapoor is also on her way to join the cast of the movie that is being directed by Ranjit M Tewari.

On Friday (September 4), Akshay Kumar's pictures went viral while shooting for the movie. The photos were captured by the local photographer which show filming around Glasgow's Barras Market (as per the local news sites).

More from the first glimpse of #BellBottom

Bell-Bottom is one of the first films to announce the resumption of its shooting schedule after the coronavirus lockdown.

The movie also stars Huma Qureshi and Lara Dutta apart from Akshay and Vaani. It is being produced by Jackky Bhagnani, Nikkhil Advani, Deepshikha Deshmukh, and Monisha Advani.

Akshay Kumar to work with Ekta Kapoor after Bell Bottom

Padman Will Release in China

Bollywood hit movie Padman is going to release in China on 14th December 2018. This has been awaited for a long time.

Here is the Padman poster for the Chinese audience with the name 'Indian Partner'.

Akshay Kumar's last release in China did decent business there and earned 100.39 Cr.

Here is the movie 2.0 teaser which is one of the most awaited in the history of Indian cinema.

This Robot 2.0 teaser can be described in only one word: SPECTACULAR

This film will create havoc at the ticket counter in India.

The film serves as a spiritual successor to the 2010 Tamil film Enthiran and features Rajinikanth reprising the roles of Dr. Vaseegaran and Chitti, alongside Akshay Kumar and Amy Jackson.

This film is the most expensive movie in India with 543 crore budget.

Watch this amazing teaser below.

And for the first time ever 2Point 0 Teaser for YouTube 3D too. You can experience a special 3D sound mix in your headphones when you watch the teaser by google cardboard or any VR headset.

2 point 0 is an upcoming Indian science fiction film written and directed by S. Shankar, co-written by B. Jeyamohan, and produced by Subaskaran Allirajah.

For more and latest news about Bollywood, stay tuned to us.

This film is produced by Dharma Productions and Cape Of Good Films and slated to release on 19th July 2019.

And it is directed by Raj Mehta.

The shooting starts in Chandigarh. Akshay Kumar and Kareena Kapoor Khan will join Diljit Dosanjh and Kiara Advani in the next schedule.

Both are having fun about how they should be on time on the set of Akshay Kumar' film.