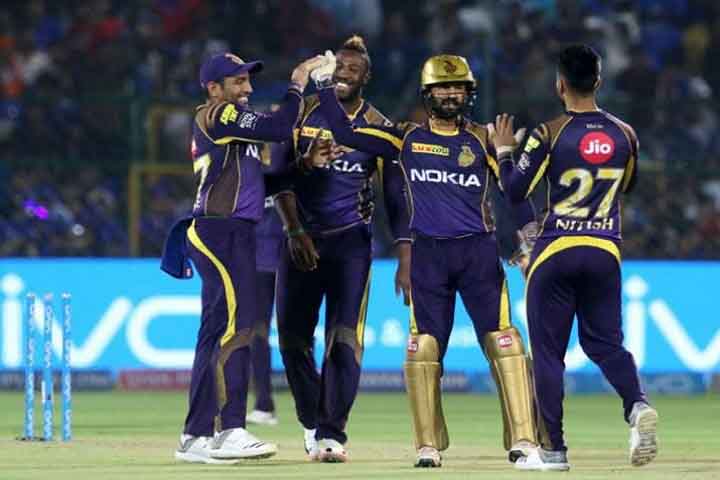 KL Rahul and skipper Ravichandran Ashwin's stunning innings went in vain as Kolkata Knight Riders beat Kings XI Punjab by 31 runs in yet another run feast contest at Holkar Cricket Stadium, Indore on Saturday (May 12). KKR posted 245 on board before KL Rahul came out with all guns to fire. He provided a explosive start to KXIP before bowled out by Sunil Narine. He scored 66 off 29 balls with the help of 2 fours and 7 sixes. However, Ashwin fought hard till the end but couldn't see through his team as they restricted on 214.

Kings XI Punjab opted to bowl first after winning the toss. On a batting heavy pitch, Narine took full advantage of the new ball. After playing 7 balls, he was dropped by Mujeeb Ur Rahaman on his own ball and that proved costly in the end. He hit six on next ball and followed up with a four. However, Chris Lynn was bowled out by Andrew Tye after scoring 27 off 17 balls including 2 fours and 2 sixes. He put on a 53-run stand for the first wicket with Narine.

After Lynn's wicket Narine became even more aggressor and hit Axer Patel for a six and followed up back to back fours to Ashwin. In this process, he reached to his second fifty of this IPL off 26 balls. He celebrated this with a two sixes and a four to Barinder Sran in 11th over. He was looking unstoppable before Tye got him out to Rahul. He scored 75 off 36 balls including 9 fours and 4 sixes. Before he got out, KKR had already reached on 128 in just 12th over. He was awarded Man Of The Match for his brilliant innings.

How KKR reached on 246 after Narine got out

KXIP tried to pulled things back after grabbing Narine and Uthappa in space of 3 balls. However, it didn't affected KKR's approach and the kept playing their shots. This time Skipper Dinesh Karthik along with Andre Russell took charge. Karthik hit his first boundary after facing only one ball to Patel. They both took Axer Patel in 15 over and scored 19 runs with 2 sixes and a four. They didn't stop here and assaulted on Mujeeb in 16th over and collect 21 runs with 2 fours and 2 big sixes.

However, Russell lost his wicket after hitting a boundary in 17th over as Tye picked his 4th wicket. After the wicket of Russell, Karthik got his first fifty of this IPL off just 22 balls before Brinder Sran grabbed him in last over. Shubman Gill then add few more runs to the total and help KKR to finished with a mammoth total of 246 after 20 overs.

How good was KL Rahul again

Chasing 247, KL Rahul continued his ruthless form and shown his intent from the very first over where he hit back to back sixes to Narine. On the other end, Chris Gayle was taking his time to get set. Rahul was on fire as KXIP reached to fifty in just 5 overs. However, on the score of 57, they lost Gayle and Mayank Agarwal in successive balls. But it didn't affect Rahul as he got his another fifty in this IPL off just 22 balls. He was going after every ball and it resulted his wicket after hitting 2 sixes to Narine in space of 3 balls. He scored quick fire 66 off 29 balls with 2 fours and 7 maximums.

After losing Rahul on 93 after 9 overs it was looking that KXIP's chances of winning the match also gone. But first Aaron Finch's 34 off 20 and after that Ashwin played a quickfire knock of 45 off 22 balls and made sure Punjab came close to the target. He put on a 53-run stand with Tye for the 7th wicket. However, their effort didn't prove enough as they remain 31 short of the target.

Andre Russell put on a all-round show in this match. He scored valuable 31 off 14 balls with bat and after that changed the game completely by picking 3 wickets. He first sent back Gayle and Agarwal in back to back balls and after that grabbed inform Karun Nair. However, he was expensive with ball as he conceded 41 runs in 4 overs.

Mujeeb, Rahul help KXIP to back on top three