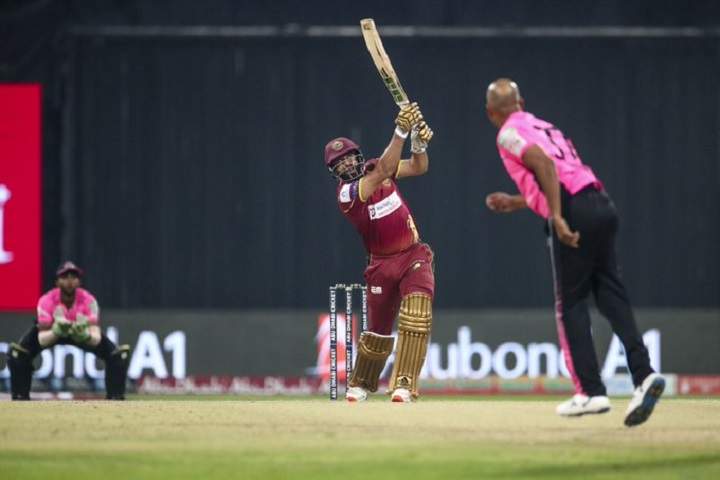 West Indies's Chris Gayle and the United Arab Emirates' Waseem Muhammad equaled the record of the fastest fifty in the Abu Dhabi T10 league. Both the batsmen scored 12-balls fifty for their respective teams and joins the elite club of the shortest format of the game.

Here is the list of the top 5 fastest fifties in the Abu Dhabi T10 league:

1. Chris Gayle (12 balls) - Equally the record of the fastest fifty in this format, West Indies' hard-hitting striker, Chris Gayle made a mockery of Maratha Arabians' total of 97 runs. Playing for Team Abu Dhabi, Gayle stormed unbeaten 84 off just 22 balls and chased down the target of 98 in just 5.3 overs to give a thumping 9 wickets win to his team.

3. Mohammad Shahzad (12 balls) - Afghanistan's wicketkeeper and one of the most dangerous modern-day batsmen, Mohammad Shahzad started the season with a bang and smashed a 12-ball fifty against Sindhis. Playing for Rajputs he helped his side to chase down 94, set by Sindhis in just 4 over. Shahzad remained unbeaten on 74 off just 16 balls.

4. Rahmanullah Gurbaz (14 balls) - Afghanistan player, Rahmanullah Gurbaz smashed the fastest fifty of the season 2021-22. Playing for Delhi Bulls, the swashbukling right-hander blasted a 14-ball half-cenntury against the Chennai Braves. It is the second fastest fifty in the history of Abu Dhabi T10 league. His fellow countryman, Mohammad Shahzad is the jointly fastest to hit fifty in the tournament in just 12 balls.

6. Moeen Ali (16 balls) - England's all-rounder Moeen Ali smashed joint 4th fastest fifty in Abu Dhabi T10 league. Playing for Northern Warriors, the attacking left-hander blasted his half-century in just 16 balls (77 runs from 23 balls) against Team Abu Dhabi on November 27 at the Zayed Cricket Stadium. This is also the fastest fifty of the season 2021 of the tournament.