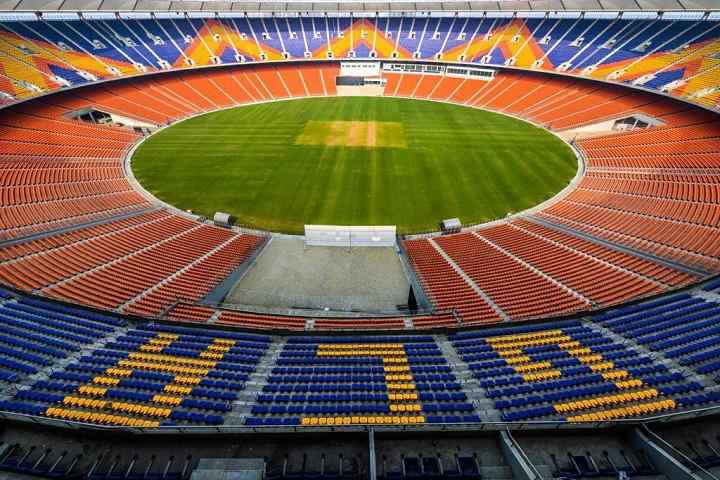 Team India and England players have reached Ahmedabad where the third of 4 match Test series will be played. Both the teams have begun training at the refurbished Sardar Patel Stadium in Motera which is the largest cricket stadium in the world with a seating capacity of 1,10,000 people at a time.

The stadium was closed in 2015 for reconstruction and next week's Test between India and England, the third of the ongoing series, will be the first international to be played at the ground since November, 2014. While both the teams are gearing up to the challenge, some of the players of both teams are impressed to see the new Motera stadium and tweeting pictures and videos of the ground.

England's pacer Stuart Broad was one of the first to acknowledge the beauty of Motera stadium and posted a video of the ground heading for his training session. "1st look at Cricket’s Cricket bat and ball largest stadium 🏟 110,000 capacity pretty impressive", the video captioned.

England all-rounder Ben Stokes quote-tweeted a video by England and Wales Cricket Board (ECB) which showed England pacers doing sprints. "Some stadium this is… and a bit of local music to help get through to the end", wrote Stokes on his Twitter account as the PA system played Vande Mataram.

Indian players too weren't behind to admire the stadium and gym facility established at the Motera stadium. Wicketkeeper-batsman tweeted a picture of his with skipper Virat Kohli, Hardik Pandya, Ishant Sharma, and local lad Axar Patel in the gym, "Great to have our first gym training session with the team at the new Motera stadium".

"Fantastic to be at the new facility in Motera, great to see such world-class facilities for cricket in Ahmedabad. Looking forward to taking the field here on 24th", added Pant.

Great to have our first gym training session with the team at the new Motera stadium @BCCI #Motera #RP17 #17 pic.twitter.com/3c4cEkrVxn

Kuldeep Yadav also catches the beauty of the stadium and Tweeted a picture of him with Rohit Sharma, batting coach Vikram Rathor, K Gowtham along with the stadium. "What a brilliant stadium @GCAMotera Great work done by everyone associated with building this facility. It will be an amazing experience to play here. @JayShah @mpparimal @GCAMotera".

What a brilliant stadium @GCAMotera Great work done by everyone associated with building this facility. It will be an amazing experience to play here. 🏟️👌🏻 @JayShah @mpparimal @GCAMotera pic.twitter.com/RAk2D75KrR

Talking about the 3rd Test, it will be a day-night Test with both team level at 1-1 after the first two matches. It will be a must-win game for England to keep their hopes alive to qualify for the final of the ICC World Test Championship. India, on the other hand, has to make sure that England doesn't win either of the next two tests and they win at least one match to qualify for the final, to be played against New Zealand.

We Will Try To Make England Series Happen On Indian Grounds: Sourav Ganguly