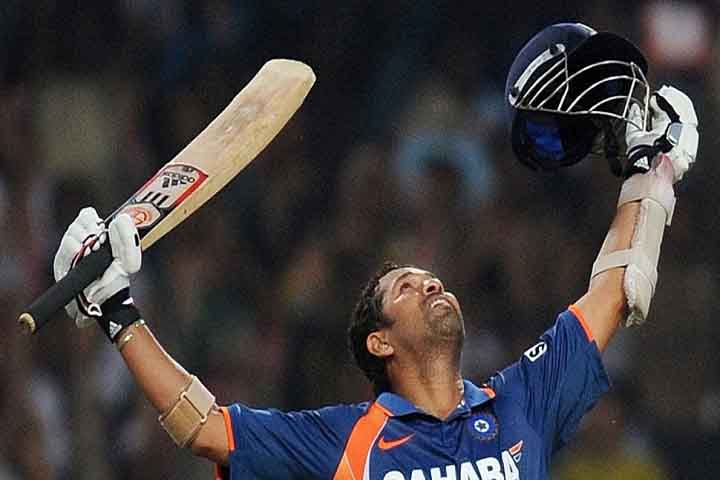 In cricket, new records are created on every day, but who had thought till eight years ago that a double century is also possible in a one-day game. Well it happened, on February 24, 2010, the great Sachin Tendulkar scored the first ever double-century (Men's category) in 50-overs format against South Africa at Captain Roop Singh Stadium, Gwalior, India. Since then only five players on seven occasions could score 200 or plus runs in an ODI match.

Pakistan's Fakhar Zaman is the newest member to be included in 200-club. He touched this rare feat against Zimbabwe at Queens Sports Club, Bulawayo, Zimbabwe. He became the first Pakistan player to reach this milestone while India's Rohit Sharma is the only player to score three double-century in ODIs.

LIST OF THE PLAYERS WITH DOUBLE-CENTURY IN ODIS IN MEN'S CATEGORY (NEWEST FIRST) :

1. FAKHAR ZAMAN (210* OFF 156 VS ZIMBABWE) - Fakhar Zaman hammered Zimbabwe in his knock of 210* off 156 balls at Queens Sports Club, Bulawayo, Zimbabwe on July 20, 2018. He also became the first Pakistani batsman to score a double-century in an ODI match. He is the promising talented batsman for Pakistan and is still new at international level, played only 18 match for his side. He has already became fastest to reach one-thousand runs in ODIs (18 innings), surpassed the great Viv Richards.

2. ROHIT SHARMA (208* OFF 153 VS SRI LANKA) - Rohit Sharma is the only palyer with 3 double-centuries in this format of the game. His third came against Sri Lanka at Punjab Cricket Association IS Bindra Stadium, Mohali, India on 13 December 2017. He was captaining India in that match and played a captain's knock of 208*. With it he became the second captain after Virender Sehwag to register a double century in ODIs.

4. CHRIS GAYLE (215 VS ZIMBABWE) - West Indies' Chris Gayle was the first batsman to score a double ton in world cup. On February 24, 2015, he punished Zimbabwe when he hammered 215 runs with the help of ten boundaries and 16 sixes in ICC World Cup 2015. He known for his brutal batting especially in T20Is.

5. ROHIT SHARMA (264 OFF 173 VS SRI LANKA) - On November 13, 2014 at Eden Gardens, Kolkata, Rohit Sharma played one the greatest knock in a one-day match. He had created history by achieving the feat for the second time in his career. First, he took mere 151 balls to reach the 200-run mark, laced with 26 boundaries and five sixes. And then, the stylish right-hander went on to score the highest individual score in ODIs, as he scored 264 runs off 173 balls with the help of 33 boundaries and nine sixes, against the toothless Lankan attack.

6. ROHIT SHARMA (209 VS AUSTRALIA) - On November 2, 2013 Rohit 'Hitman' Sharma scored his first double-century in ODIs. In this innings, he hit 17 sixes which is a record in an ODI innings. He took Australian bowlers all-around park at M. Chinnaswamy Stadium, Bangalore, India. It was a high scoring match where India came out as victorious and also won the series 3-2.

7. VIRENDRA SEHWAG (219 VS WEST INDIES) - On 8 December 2011 at Holkar Stadium Indore, the Nawab of Njafgarh, Virendra Sehwag, became the second player to cross the 200-run mark in 50-over cricket. He took on West Indies side by storm playing at Indore and took only 140 deliveries to reach the double-century. He captained India in that match and became the first captain to score a double ton in ODIs.

8. SACHIN TENDULKAR (200* OFF 147 VS SOUTH AFRICA) - The God of cricket, Sachin Tendulkar was the first player to reach 200 mark in 50-overs format. The Master Blaster, scored the double century against South Africa and remained unbeaten on 200, at Captain Roop Singh Stadium, Gwalior. Playing at Gwalior, Tendulkar was at his sublime best as he remained not out at 200 off 147 deliveries.

PLAYERS WITH DOUBLE-CENTURY IN WOMEN'S ODI :