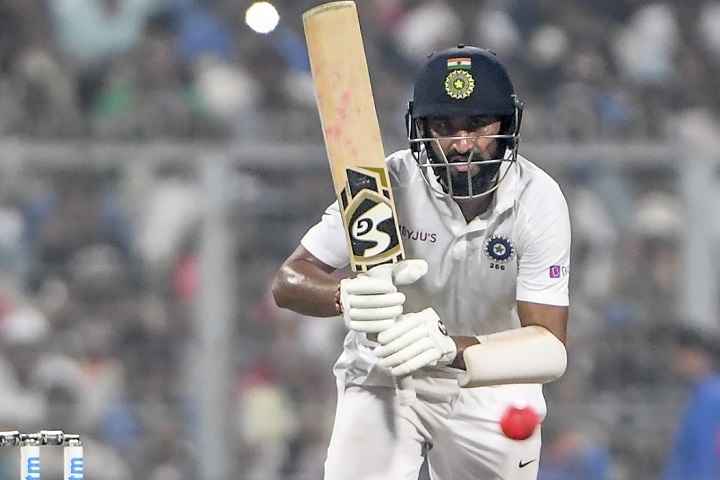 Indian Test batsman Cheteshwar Pujara is one of the all-time players who has earned a reputation as a perfect tailormade Test player which has made him a strong pillar of the Indian cricket team in the longest format of the game.

Having made his debut in 2010, Cheteshwar Pujara has completed 10 years as an Indian cricket today. During this time, the stylist right-hander had scored 5840 runs in 77 Tests at an average of 46.19 with 18 hundred and 25 half-centuries.

On completing 10 years, the 32-year old took to Twitter and thanked the people who have supported him in this journey and also wished his wife Puja a happy birthday.

"Truly privileged and blessed to have completed 10 yrs as an Indian cricketer. Growing up playing cricket in Rajkot all those years back, under the watchful eyes of my father, I would never have imagined the journey would bring me here....(continued...)", Pujara wrote on Twitter.

"....Thank you for all the support and wishes. Look forward to contributing lots more to the team! P.S. Coincidentally, today also happens to be the wife's birthday, so Puja has ensured I will never forget this date", he added.

....Thank you for all the support and wishes. Look forward to contributing lots more to the team!

P.S. Coincidentally, today also happens to be the wife's birthday, so Puja has ensured I will never forget this date 😀#grateful #blessed #10years #lotsmoretogo

Pujara made his first appearance in the red balls format against Australia at the Chinnaswamy Stadium in Bangalore on 9 October 2010. While he failed in the first innings, he made his chance count in the second innings by top-scoring 72 as the hosts gunned down a fourth-innings target of 207 successfully.

The number 3 batsman of team India, played a vital part role in India's first-ever Test series win against Australia in Australia in 2018-19. He clubbed 521 runs in four Tests with three centuries, averaging 74.43 and was awarded man of the series for his once in a lifetime performance during the series.

And now, after almost two years, the eyes will be on him when India will tour Australia to play 4 Tests, 3 ODIs, and 3 T20Is starting from November this year.

Virat Listen To Advice But He Will Always Play His Natural Game: Cheteshwar Puja...