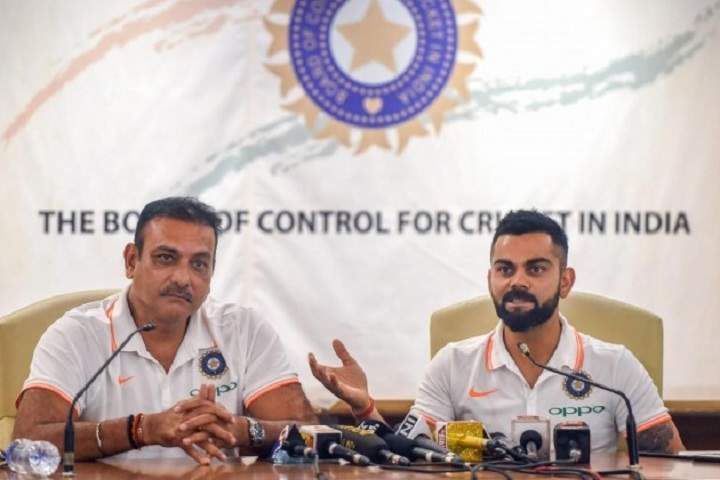 Before departing to England for the World Cup 2019, team India captain Virat Kohli addressed media along with the coach Ravi Shastri on Tuesday (May 21). During the press conference, Virat stressed the importance of the intensity and focus throughout the tournament and confirmed the same 15-member squad that had been picked earlier. He also believes that this World Cup is the most challenging World Cup of his career.

"Personally, I think this is probably the most challenging World Cup of all the three that I've been a part of, because of the format. "Everyone has to be at their best intensity from the first match onward and we don't have any room for complacency".

"That's why it's the World Cup, that's why it's the most important tournament in the world. We expect that kind of pressure from the first second. We're not even going to let ourselves think that maybe the first week onward we'll get into it," Kohli said.

In recent times, England's pitches have flat up and high scores can be expected during the tournament. However, the Indian captain believes that despite the high scoring expectations, "scores of 260-270 can be defended".

"White-ball cricket, playing in England, playing an ICC tournament - the conditions are not that different or that difficult I would say, compared to Test cricket. The pressure is the most important thing in the World Cup, and not necessarily the conditions," Kohli said.

"Secondly, all the bowlers in the squad, even during the IPL they were bowling themselves to be in the zone for 50-over cricket. And we saw the guys bowling. No one looked tired or fatigued after bowling four overs. They were fresh. The ultimate goal is to be fit for the 50-over format and not let their fitness come down and that was communicated before the IPL," he added.

One of the main focus in the press conference was on intensity which can be difficult to maintain in 46-days long tournament but Kohli pointed to the football clubs who do the same over a ten-month league in a season.

"This is the challenge. If you look at all the top-class clubs in the world, like in football, they maintain their intensity for three-four months in the Premier League, or in the La Liga. So if we get on a roll and if we maintain consistency then we should be able to do it for the length of the tournament.

"The good thing is that every game has a decent gap between each other. From that point of view, I don't think that the players will burn out even if we have intense games. We will always have time to regroup and go for the next. So the best thing is that we'll have four tough games straight up and that will set the tone nicely for us."

In recently concluded Indian Premier League, one of India's key bowlers Kuldeep Yadav looked completely off-colour during the tournament and could manage to take only 4 wickets in 9 games he played. However, Kohli reiterated his faith in Kudeep and said he will be crucial in the middle overs along with Yuzvendra Chahal.

"Someone like Kuldeep, it is important to see a period where things don't go your way also. We are glad it happened during the IPL rather than happening during the World Cup. So Kuldeep has time to reflect, correct things and come into the World Cup even stronger. We know the kind of skill set he possesses along with Chahal. They are really two pillars of our bowling line-up," Kohli said.

There have been a lot of talks about the importance of MS Dhoni who is going to play probably his last World Cup. The former India captain looked in really good touch during the IPL and hence Indian coach Ravi Shastri believes that he will be crucial for India in World Cup.

"Mahendra Singh Dhoni is someone who'll be right there. His communication with Virat has been fantastic," Shastri said. "There is no one better than him when it comes to keeping and also dealing with those tight situations in matches. It was great to see the way he was moving in this IPL. He will be a big player in this World Cup."

India will start their World Cup campaign against South Africa on June 5 in Southampton. Before that, the men in blues are scheduled to play two warm-up matches against New Zealand (May 25) and Bangladesh (May 28).