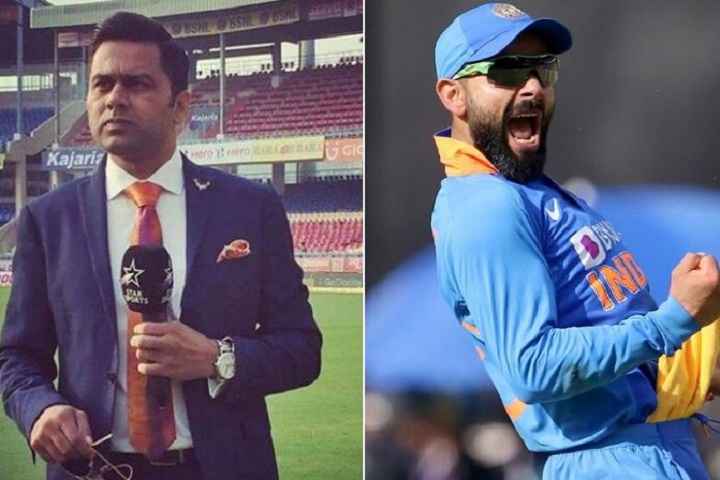 Amid the ongoing talks regarding the change in the captaincy of India's limited-overs side, former India cricketer-turned-commentator Aakash Chopra has come out in support of current Indian captain Virat Kohli and defended him by saying that the Royal Challengers Bangalore (RCB) skipper cannot be blamed for the franchise's poor performances.

Recently, former Kolkata Knight Riders' captain, Gautam Gambhir had slammed Virat Kohli after RCB failed to break the jinx of winning the trophy yet again at this year's IPL. Gambhir said that it is time for Kohli to quit RCB's captaincy. He also opined that instead of Kohli, Rohit Sharma, who just won the 5th IPL title as captain for Mumbai Indians, should be given India's limited-overs captaincy.

Disagreeing with Gambhir's statement, Chopra said that though Rohit is outstanding as the captain, he should not be given the leadership of the national side based on his success in the IPL. He asked if Rohit will win those trophies with the RCB team, which is there with Kohli?

"Gautam Gambhir believes that it is the nation's misfortune if Rohit Sharma is not made the Indian T20I captain because he is the most successful captain in the IPL", Chopra said in a video posted on his Facebook page.

"But I have a question that if Rohit was given the RCB team, which is there with Kohli, will he have won two, three or four out of the five titles MI have won? Rohit as a captain is outstanding, I love him to bits but can the Mumbai Indians' success story be equated with India, that is my question. Just because Kohli's team does not do well, does it mean that is Kohli's fault", he added.

Akash Chopra who represented India in 10 Tests and scored 437 runs with 2 half-centuries, said that he doesn't see any change in captaincy at the moment as India isn't scheduled to play many matches in the shortest format of the game at the moment.

"They cannot make him the captain now, however much you may try. I know it is not fair, I know it is tough but this is what it is. It cannot happen now as there is a simple reason for that. There are not too many T20 matches at the moment. Let us wait for some time, let us be cool, he cannot become the captain now. Kohli is the captain currently and I don't feel that there is going to be a captaincy change in this team now", Akash stated.

ICYDK, Rohit Sharma has been rested for the limited-overs series (3 ODIs & 3 T20Is) against Australia starting from November 27 to gain full fitness. However, he has been added to the Test squad which will see Virat Kohli missing the last three matches as he has granted paternity leave.