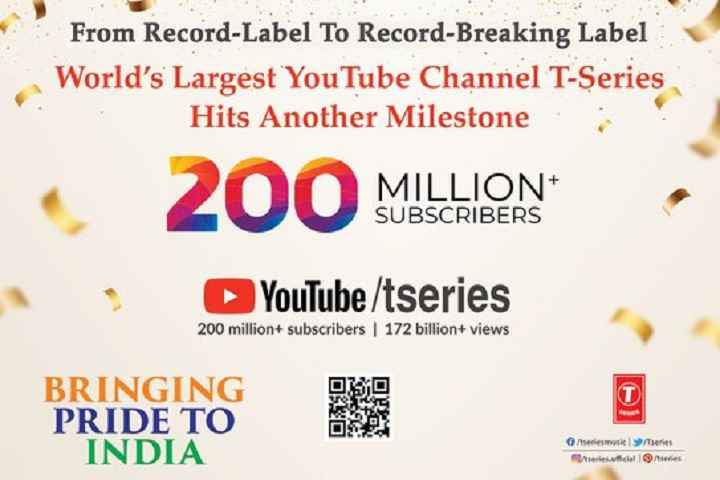 Mumbai, December 6 - Bhushan Kumar-headed music label, T-Series creates history by becoming the world's first YouTube channel to reach 200 million subscribers. The company, which was founded by Gulshan Kumar on July 11, 1983, is at least 77 million ahead of the second-placed American YouTube channel and streaming media show, Cocomelon, acquired by the UK company Moonbug Entertainment.

T-Series is also the most viewed YouTube channel with over 172 billion views. Not just a record label, T-Series is one of the leading production houses in India. It has produced blockbuster films such as Aashiqui, Dil Hai Ke Manta Nahin, and Bewafa Sanam in the 90s apart from Tum Bin, Humko Deewana Kar Gaye, Aashiqui 2, Baby, Satyameva Jayate, Bharat, Kabir Singh, among many others in the last 20 years.

Speaking on the milestone of touching 200 million subscribers, Bhushan Kumar told the republic world, "A year back we touched the maximum number of subscribers which was 100 Million and that was also a landmark and today, we've touched 200 million. We're already the biggest in terms of views and subscription but this 200 million landmark is a big achievement and I would like to thank my audience who listen to our songs and view our songs on YouTube".

It is quite fitting that T-Series has produced some of the chartbusters songs over the years which are still echoing in the hearts and minds of the people. The Chairman & MD of T-Series, Bhushan Kumar also opened up about the one song that he most loved.

"There are plenty of them so I can't just mention one, because all are very dear to me and I get involved with all the songs while making. My all-time favorite is the Aashiqui album that my father made but right now, all the songs that I make with my composers are my favorite", he said.

Going forward, T-Series has plenty of films under its production, including small to high-budgeted projects. Opening about the upcoming films, Bhushan Kumar said, "We're doing a lot of films, we have a big film with Ranbir Kapoor and Shraddha Kapoor which Luv Ranjan is directing. We have another with Anil Kapoor and Ranbir Kapoor titled 'Animal' which will be directed by Kabir Singh fame Sandeep Reddy Vanga. We also have Cirkus with Ranveer Singh with Rohit Shetty directing and producing it".

He then revealed that his most awaited movie is Adipurush as they have been connected with mythology a lot from his father's time. The movie features Prabhas, Kriti Sanon, and Saif Ali Khan and it is based on "Ramayan". He revealed that "Adipurush" is being made in the budget of Rs. 400 crores, making it the costliest film of Indian cinema.

World’s NO. 1 Youtube channel, T-Series has hit 200 million subscribers, becoming the 1st channel in the world to ever reach this landmark! It's a proud moment for the entire country that an Indian channel sits at the top of YouTube in the world.
#TSeriesHits200MilSubs pic.twitter.com/V4MiMGKdBI